Now I am far from an isolationist, competitively speaking.  I am all for scholarship runners from outside the U.S. competing in the NCAA/NAIA and certainly welcome top competition from across the globe coming to top U.S. races to compete.  I see those aspects as enhancing domestic talent development, at the top of the sport it gives U.S. runners a higher bar to aspire towards.  However, a report was recently shared with me that left me rather puzzled.  While I can recognize that the supporters behind the efforts to give some Kenyan athletes a leg-up have their hearts in the right place -- and, after all, it is their money to spend as they see fit -- I have to wonder why there is this type of push to support good-yet-not-great elite runners in the world of elite marathoning (perhaps a generous assessment) from Kenya instead of a crowdfunding effort for U.S. runners at that level.  The two runners in question have run 2:21 and 2:30+ which, even at altitude in the U.S., would not be considered on the cusp of world class performances for men.  It is not as if there are not agents and coaches combing the Kenyan countryside for talent to develop and bring to marathons in Europe, Asia, and the U.S. already, there is a scouting and development system that has been in place for many, many years, as attested to by the world class results from Kenyan runners for the past four decades or so.  If there are African runners who are not getting the opportunity to compete abroad, it is far more likely that they are simply not (yet) good enough to warrant that investment rather than having slipped through the cracks in the system.

Comparatively, there is little in the way of a system of talent identification and development in the U.S. for the marathon.  There are sponsored training groups here, certainly, yet they are small in number and have limited funding and space.  On top of that, this effort will bring these Kenyan runners to a race to compete with national-class and regional-class U.S. runners -- many of whom hold down jobs to make ends meet -- for a rare substantial marathon payday for runners at that level.  This effort is subsidizing talent not good enough for any number of agents to take to any level of prize-money road race in Europe or Asia to come to a race in the U.S. and compete with U.S. runners in one of the few races that stands in support of grassroots development here.  Now I honestly hope that the two Kenyans come in and run sub-2:15 and contend for the win, as long as they will be coming I genuinely wish them success.  I am just grasping for the logic why this endeavor would be a more worthy expenditure by the U.S. running community over doing the same for our own runners.  Is this outlook a short, slippery-slope away from viewpoints that desire U.S.-only prize purses at all domestic races or want to see scholarships at U.S. colleges and universities reserved exclusively for U.S. athletes?
Posted by Andrew Armiger at 1:30 PM No comments:

Recently, I saw this great commentary come up on twitter:


If you want to make your team or program better? Invest in quality people, coaches who can coach, not glitzy facilities & fancy equipment.
— Vern Gambetta (@coachgambetta) February 22, 2012

Methodology is what matters.  This is consistently proven true and there are obvious examples of this in any sport on any level.  The best coaches surround themselves with the best people, both the athletes as well as the assistants, administrators, and consultants, and relentlessly explore to find the best methods and strategies to put their athletes in a position to improve and succeed.  Good facilities and equipment are nice, yet do little to foster improvement and success in and of themselves.  Good coaches and quality people can attain improvement and success despite lacking facilities and equipment; glitzy facilities and fancy equipment will not achieve consistent success in spite of poor coaching and dysfunctional individuals.  The best programs and teams maintain success from the top down, keeping in place key individuals who can find the right people with the right qualities when it is time to retool and reload talent.  Teams like the San Antonio Spurs, New England Patriots, LA Lakers, Green Bay Packers, and Pittsburgh Steelers.  None of those have facilities, equipment, or location that are any better than those of their peers.  Yet many others that do have locations, facilities, and equipment (and even payroll) on a par or better somehow struggle to find similarly consistent success.  The real difference, then, would be the culture ingrained by the component individuals and their sum within each organization.


It is evident in collegiate track and cross country, too.  Colorado, which has fine facilities for cross country training (generally speaking, the facilities for cc are often chiefly found outside of a college campus rather than on it), was about at the bottom of the basement in terms of track facilities in the Big 12 when they won their conference track team title against powerhouses that spend exponentially more on track facilities, like Texas A&M, Texas, Oklahoma, and others.  Colorado has typically not finished within the top five at the Big 12 track champs.  This triumph happened because the entire coaching staff and the athletes collaborated closely and implemented the right peaking strategies to get the most out of their talent at the right time.  They were on the same page and executed their plan with excellence, even if to that degree just for that season.


Few top distance runners would consider Stillwater, OK a destination for training over prime locations such as Palo Alto, CA; Eugene, Oregon; Boulder, CO; Madison, WI; or even Fayetteville, AR.  Yet the coaching staff at Oklahoma State, headed by Dave Smith, has been able to lure talented prospects to campus and once there has trained them to run together well enough to upset traditional powers from those other locations - locations with ostensibly far better facilities for distance running training - to win a pair of national team titles plus a runner-up in cross country recently.


An example in professional running in the USA would be the Hansons ODP in Michigan, another location which few would readily head up a list of ideal training spots.  The Hansons program has routinely brought the best out of many of their athletes to make them competitive in the marathon on both the national and international levels.  There are teams based at altitude and on the west coast which have rosters boasting talent with far better credentials coming in and often have expensive equipment and facilities that the athletes use yet have much spottier success in producing marathon performances on a par with said credentials.  Additionally, two of the best Japanese men in the marathon in the past couple of years, Yuki Kawauchi and Arata Fujiwara, have not found their ultimate success within the traditional infrastructure of the sponsored corporate team but are instead considered amateur outsiders.  With the right environment (support network) in place, you can make it happen pretty much anywhere.  Without it, success is going to come inconsistently, if at all.

"If you're not good enough to be internationally competitive then you don't need to go to the Olympics," he said.  "I tried, and it's over.  Selection is based on results, and I do not think I will be picked."  Having followed his own vision and failed, even in defeat the strength of Kawauchi's character and sportsmanship shine through.

Following the race Kawauchi shaved his head in atonement for his performance.  "I felt that I had to give everyone who supported me a sign of my remorse," he said.  "It's better that my shame be exposed for everyone to see." 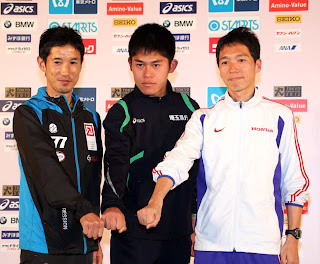 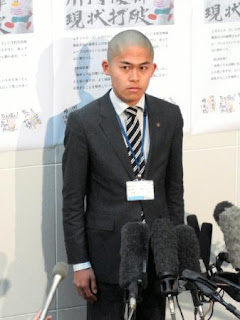 Another one, even better than the previous one!  Great training wisdom -- as Tyler McCandless put it, "[captures] the essence of training for the trials."


Marathon Road from Paul Sanft on Vimeo.
Posted by Andrew Armiger at 7:59 PM No comments:

Another training group (interesting that two of the best marathon training groups are in the upper midwest, not at altitude nor in a temperate/sunny clime) that deserves more credit than it tends to receive. The production quality of these videos is really improving: http://youtu.be/ulTx8uWlpZI


Posted by Andrew Armiger at 9:45 AM No comments:

c/o RRW:
Fans can watch the Bank of America Chicago Marathon live online and free of charge this Sunday, thanks to the race's broadcast partner, NBC Chicago.

This is the first time that the race has been available for free global viewing online.
Posted by Andrew Armiger at 7:24 AM No comments:

Watch the BMW Berlin Marathon in the US for FREE

Fans in the USA can watch the BMW Berlin Marathon, either on-line or on television, for no charge.  The race will be carried by Universal Sports as follows:

To find the Universal Sports television channel, go to UniversalSports.com and click TV CHANNEL FINDER in red at the top of the page.  On broadcast (over-the-air) television it usually a sub-channel of the local NBC affiliation.
Posted by Andrew Armiger at 4:17 PM No comments:

Email ThisBlogThis!Share to TwitterShare to FacebookShare to Pinterest
Labels: BMW Berlin Marathon
Older Posts Home
Subscribe to: Posts (Atom)
On some days the rain falls hard, on other days it falls gently, and on some days it does not fall at all. But in the final analysis, the process cannot be rushed, and we must wait patiently for the natural order of things to run its course before we can admire the final product.